2 and a Half Tenors are outstanding in their field 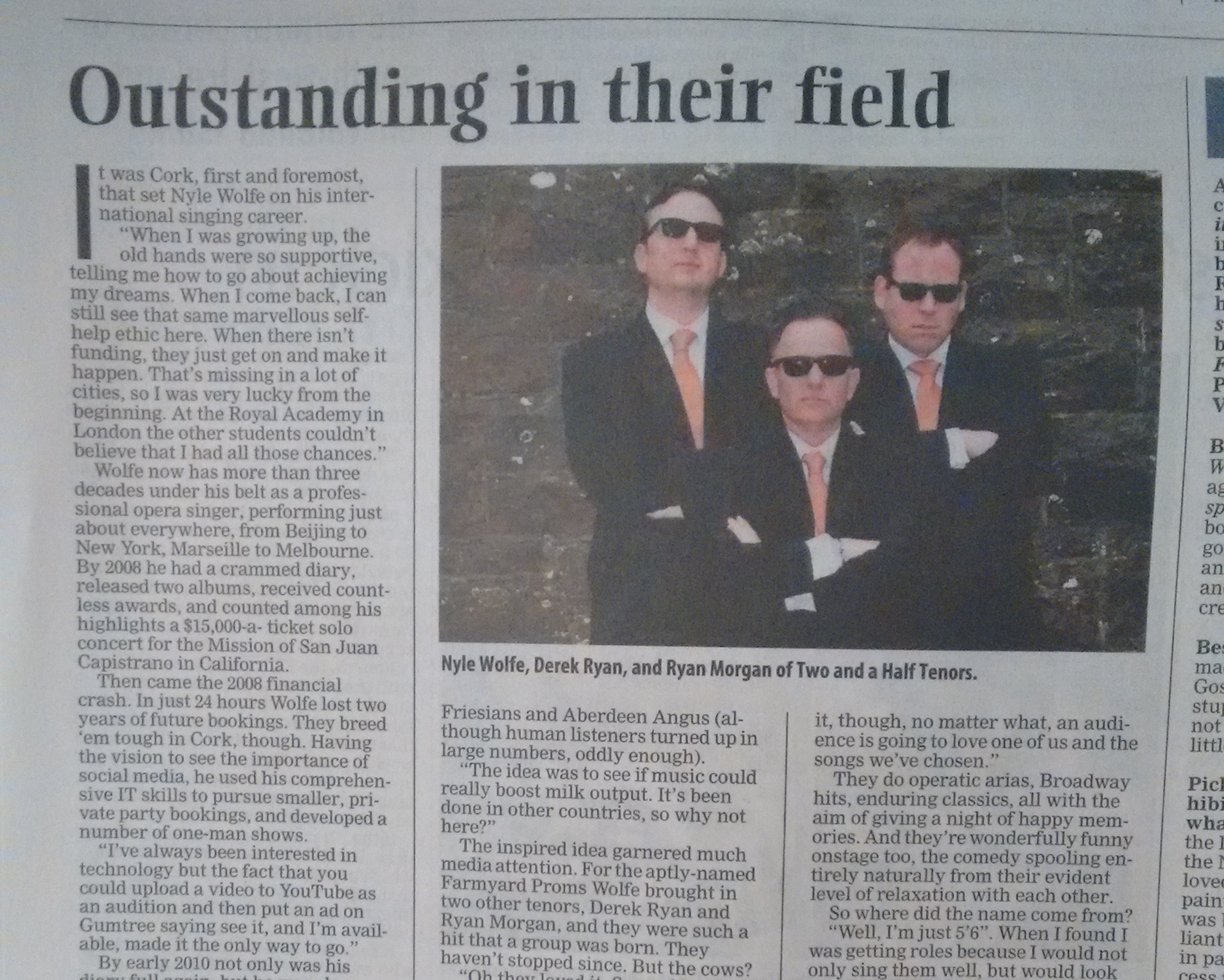 “When I was growing up, the old hands were so supportive, telling me how to go about achieving my dreams. When I come back, I can still see that same marvellous self-help ethic here. When there isn’t funding, they just get on and make it happen. That’s missing in a lot of cities, so I was very lucky from the beginning. At the Royal Academy in London the other students couldn’t believe that I had all those chances.”

Wolfe now has more than three decades under his belt as a professional opera singer, performing just about everywhere, from Beijing to New York, Marseille to Melbourne. By 2008 he had a crammed diary, released two albums, received countless awards, and counted among his highlights a $15,000-a- ticket solo concert for the Mission of San Juan Capistrano in California.

Then came the 2008 financial crash. In just 24 hours Wolfe lost two years of future bookings. They breed ‘em tough in Cork, though. Having the vision to see the importance of social media, he used his comprehensive IT skills to pursue smaller, private party bookings, and developed a number of one-man shows.

“I’ve always been interested in technology but the fact that you could upload a video to YouTube as an audition and then put an ad on Gumtree saying see it, and I’m available, made it the only way to go. By early 2010 not only was his diary full again, but he was also booking other artists. Singers for Hire now engages 20 professional performers between Ireland and the UK (make that 40 when you include his Sydney franchise, set up in 2013).

In June 2015 he hit on the idea of giving a free open-air concert in a farmyard at Pallasgreen, Co Limerick, ostensibly for a milking herd of Friesians and Aberdeen Angus (although human listeners turned up in large numbers, oddly enough).

“The idea was to see if music could really boost milk output. It’s been done in other countries, so why not here?”

The inspired idea garnered much media attention. For the aptly-named Farmyard Proms Wolfe brought in two other tenors, Derek Ryan and Ryan Morgan, and they were such a hit that a group was born. They haven’t stopped since. But the cows?

“Oh they loved it. Several have joined our fan club!”

Ryan and Morgan are both also well established in their field, so how does it work, three individual tenors touring as a unit? Are there rows behind the scenes?

“It’s like three brothers — we love, hate, drive each other mad! We’re very different personalities and we won’t always agree. The way we see it, though, no matter what, an audience is going to love one of us and the songs we’ve chosen.”

They do operatic arias, Broadway hits, enduring classics, all with the aim of giving a night of happy memories. And they’re wonderfully funny onstage too, the comedy spooling entirely naturally from their evident level of relaxation with each other.

So where did the name come from?

“Well, I’m just 5’6”. When I found I was getting roles because I would not only sing them well, but would look funny into the bargain, I realised that this was actually a plus and when we three decided to work together (Derek is 6’4”, and Ryan 6’7) that’s how Two and a Half Tenors, came about. Audiences realise immediately that we don’t take ourselves too seriously, and they can relax.”
http://www.irishexaminer.com/lifestyle/artsfilmtv/the-two-and-a-half-tenors-are-outstanding-in-their-field-410134.html