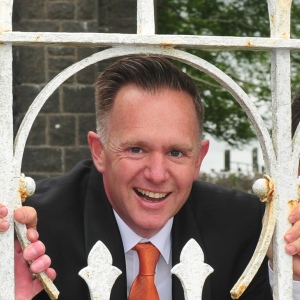 Nyle Wolfe sang his first concert at the tender age of 6 performing “White Christmas” and “Rudolph the Red Nosed Reindeer” in his local church. A simple “Sing and Get Paid for It!” ad in the Cork Examiner led to his professional debut in Cork’s Opera House and a job as a “Bluecoat” in Trabolgan. He made his television debut with RTE aged 21, dressed as Dorothy Gale. He is the winner of several major national and international awards and has delivered pizza professionally in cities around the world. A graduate of the Royal Academy of Music and the Opera Studio in Zurich, Nyle was soloist and captive at the Musiktheater im Revier, Germany for six years. He met his wife while bluffing an Irish accent as a butler at the Bunratty Castle Medieval Banquets. They have since built their own castle in Co. Limerick, where they are rearing three children. He has made several opera and musical recordings in his bedroom as well as for RTE, BBC, Sony and Naxos. He is very unpopular with hotel managers around the world for his surprise outbursts as “Marco the Opera Singing Chef”, a cabaret act he has performed for the last 10 years.