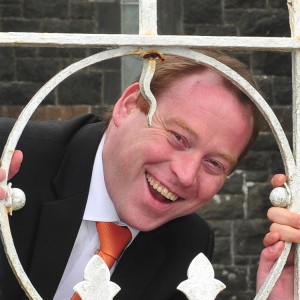 Derek Ryan (the world’s deepest tenor) is a native of Tipperary, where he still resides with two rowdy boys and the poor woman who was unfortunate enough to marry him. The only member of the Two and a Half Tenors with an authentic Irish accent, Derek began his vocal training with Dr. Veronica Dunne at the Leinster School of Music. Despite chronic low self esteem as the middle child of 12, he was lauded by Gay Byrne on the “Late Late Show”, has toured extensively in the US and performed in Carnegie Hall in New York. His inspiration in life is “fresh bread and homemade strawberry jam”. He has co-written and starred in two shows; a Paul Robeson tribute show that toured the country to critical acclaim and “Echoes of the Past”, a musical and narrative Irish history. Derek has performed in and directed many charity concerts for the Cystic Fibrosis Association and the Irish Cancer Society. He is a keen amateur photographer and a fanatical GAA supporter. He plays a good game of tennis and is a enthusiastic horseman. He is much noted for his interpretation of Richard Carpenter songs.